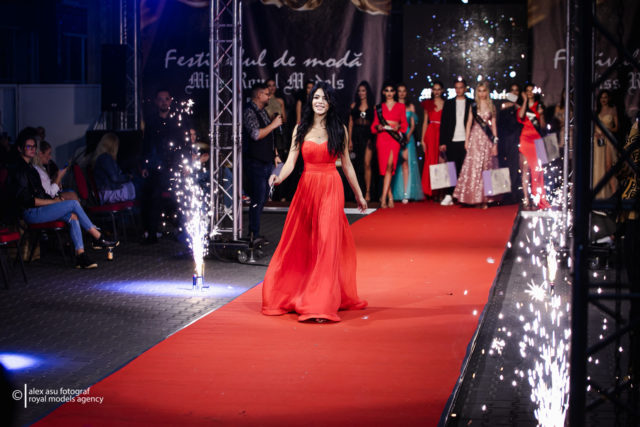 Royal Models Agency in partnership with Electroputere Parc proved once again why they are able on September 3, 2022 that seriousness and involvement define the team, when they staged the XVII – edition of the Miss Royal Models ROMANIA FASHION FESTIVAL . The festival took place in the premises of Electroputere Parc starting at 18:00 when the guests started arriving at the venue of the event, which is announced to be a grand one.

As a result of the good collaboration between Royal Models Agency and Electroputere Parc, the event turned out to be a memorable one, capturing the attention of all spectators, including people who were passing by, they stayed throughout the event forto watch the whole kingdom of beauty and creativity.

Rolland Toma opened, after 18:30, the 17th gala evening of the festival in Craiova, on the podium set up in Electroputere Parc. The eight fashion presentations of the evening, combined with the beauty of the girls who participated in the Miss Royal Models ROMANIA contest, drew tears of applause from the several hundred spectators who came to see the Miss Royal FASHION FESTIVAL for the 17th time in Craiova Models ROMANIA.

The event started with YVETTE DESIGN, which staged a collection intended for beautiful, energetic and especially romantic women. The designer develops an artistic act through each outfit, like a painting canvas on which he lays out his ideas, designing clothing models step by step, thus seeking perfection and offering lightness, convenience, luxury, style and attitude.

The event continued with a collection signed by Wonder Wink by MED TEHNICA which was designed to face the highest level of performance. The uniforms presented at the festival are made of breathable material which, in combination with the ergonomic cut, meets all the conditions needed by medical staff.

In the PREMIERE in Romania followed the Skin-X collection signed by GEORGIA CHIONI from Greece, which was inspired by an award-winning play written by Georgia Chioni, called “X”. The character of the protagonist in the play – Magda / Divine was the source of inspiration for the entire collection. A complex woman, emanating mystery, sexuality, sensuality, dynamism, a contemporary neo-femme fatale from a film noir, with an aesthetic based on forms characterized by eclecticism, eccentricity, glam rock, as well as certain elements of fetishism and retrofuturism, thus creating a distinctive kalos.

The festival continued with the presentation of the Liberty by MENTOR collection, made following the interaction of the Mentor team with young people from the defense structures and beyond. It tries to capture the state of mind of a generation absurdly threatened by a senseless fight in a war that they don’t understand and don’t want. The collection clearly points out the ideas of young people, it uses comfortable, flowing materials, of the best quality, intended for everyday outfits. It is addressed to those with a confident and free spirit, regardless of age.

This was followed by the “Feelings” collection signed by Daniela Nita, the creator of the GENUINE CONCEPT brand, which encourages the modern woman towards sincerity and self-acceptance and infuses her with feminine energy, uniqueness, supporting her not to be afraid to show her vulnerability, fragility, but especially inner strength. The outfits show and support the woman’s personality which will give her the strength to be herself.

The swimsuit trial of the 12 contestants, offered by BLD by Exclusive, was what made the jury, as well as the public, notice the perfect shapes of the contestants.

The event continued with the designer SONIA TRIFAN whose collection was full of sparkle, glam and a lot of femininity. It is an ode to the Romanian woman, beautiful, elegant and full of sex appeal. The collection is dedicated to all women who know how to wear an evening dress with attitude and good taste

The last test of the beauty contest followed, the evening outfits offered by DORYA, and the test that made the jury decide who will wear the crown of Miss Royal Models Romania for the year 2022.

Dark by FLORIN BURESCU, the 2022 collection, made the public enter a world of beauty, uniqueness and perfection. Black predominated in this collection and was highlighted by hand-sequined material, beads, with many applications and natural veils that gave a sophisticated note to this exclusive collection.

The one that closed the series of fashion shows was ANDREAE DOGARU, this one putting on stage a perfect collection. “Dark side” of Gothic inspiration represented a story about beauty and horror, which invites you to experiment, challenges you to take over the power and be the person who decides.

The beauty pageant ended with the grand finale of the beauty pageant where Radu Maria Alexandra from Curtea de Arges convinced the jury that she deserves to hold the title of Miss Royal Models Romania 2022 for one year.